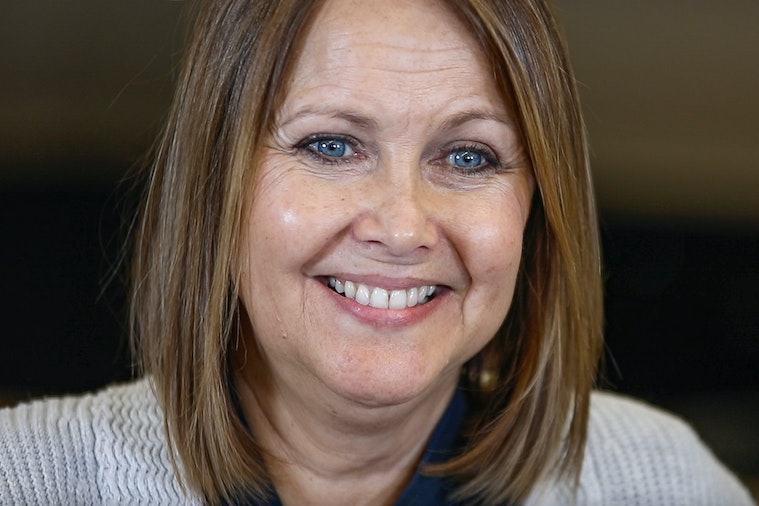 Strength through giving: A cancer survivor pays it forward

When Angie Blankenship woke up following a double mastectomy surgery, she was relieved to hear that her breast cancer had not spread to her lymph nodes. But, she said, “in that moment of jubilation, I also knew that we had the fight of healing.”

“I saw a quote the other day that said, ‘Just because I smile as I carry this load doesn’t mean it isn’t heavy.’ And I think that’s the missing piece for people that don’t walk this path,” Blankenship said. “…There are days when I don’t want to get out of bed, and there are days when I can’t get out of bed. My bones hurt, and I can’t wake up. But people don’t understand that. I’m a survivor. I’m cancer-free. What’s the problem?”

Blankenship has learned to manage the challenges of healing with support from her family, friends, and the WVU Cancer Institute. She has also boosted support for others by contributing to cancer awareness efforts and fundraising events, such as the Bob Huggins Fish Fry.

In years past, Blankenship and her husband, David, now owners of the Boston Beanery Restaurant and Tavern in Morgantown, West Virginia, have donated food to the Fish Fry, which raises money to aid cancer care and research via the Norma Mae Huggins Endowment at the WVU Cancer Institute. The endowment is named for Huggins’ mother, who passed away in 2003 after a long battle with colon cancer.

“I want people to really understand that breast cancer, any cancer, is a journey,” she said. “They call it a journey for a reason. We have a new normal. And the Cancer Institute, and the support of things like Bob Huggins and the Fish Fry, allows us to live our new normal in a way that is comforting. And it’s important. And we need you.”

Angie Blankenship knew she was meant to share her cancer story to help others almost as soon as it began. Not long after discovering a lump under her arm and learning she had aggressive, stage-2 cancer that would likely require surgery, she was sitting in a waiting room when another patient asked how she found such strength.

“I realized then that I have hope. It’s not just strength,” she said. “I wasn’t strong enough to carry it myself, but I had hope in the Lord and my faith was what was going to get us through this. At that moment, I knew that I was going through this journey so I could help someone else, so I could bring awareness.”

Blankenship underwent surgery and post-operative treatment in Charlotte, North Carolina, where she lived at the time. When she moved to Morgantown two years later, she planned to drive back to the Tar Heel State to visit friends and family for follow-up appointments every six months. Then, she found a knot behind her ear, and her oncologist in Charlotte said she needed a team in Morgantown.

Blankenship loved her medical team in Charlotte, so she was reluctant when she first came the WVU Cancer Institute. Since her initial visit to check out the benign knot, she’s been impressed by the quality of care, support services and other resources for cancer patients and survivors.

“It’s better than what I had,” Blankenship said. “There’s a comfort. I walk in there with a smile. I’m not going to say that when I lay down for a scan that that angst doesn’t come back, because I think it always will. But I know that I’m in good hands. I know that I’m taken care of. And I know that if something goes wrong or comes back, I’m going to be OK.”

Because cancer affects every aspect of a patient’s life, Blankenship is particularly appreciative of the Cancer Institute’s efforts to provide comprehensive care. Staffers offer exercise and nutritional guidance to help her feel her best, coordinate support groups that create a sense of community and ask what she needs to thrive as she as she conquers the continuing challenges of recovery. On June 3, 2022, she marked seven years in remission.

Blankenship is eager to share her story because she hopes it will help the cancer patients who come after her.

“I had it pretty good, but it can only get better,” she said. “And that’s why I feel like, for me, grace has been bestowed upon me, so anything I can do to help those that come behind me, it’s my responsibility to participate in that.”

“We’re slowly inching our way toward a very specific personalization of medicine and of cancer care, and eventually, one day, we hope that we’ll be able to either prevent it from happening and/or certainly cure it and treat it in the most efficient way possible,” Hannah Hazard-Jenkins M.D., director of the WVU Cancer Institute, Jean and Laurence DeLynn Chair of Oncology, and associate professor of surgery at the WVU School of Medicine, said. “I cannot emphasize enough how important this is. Patients with cancer have better survival when they have access to clinical trials.”

But the benefits of the WVU Cancer Institute go beyond access and quality of care. Blankenship said her care team understood her many struggles, from changing her diet to her lifestyle and more, outside of the medical necessities.

“They are the pillow that I fall into that I didn’t know I needed,” Blankenship said. “There is a safety net, there is a knowledge, there is a community and a calm, that you know when you go into that place. They want to help you, support you and help you grow.”