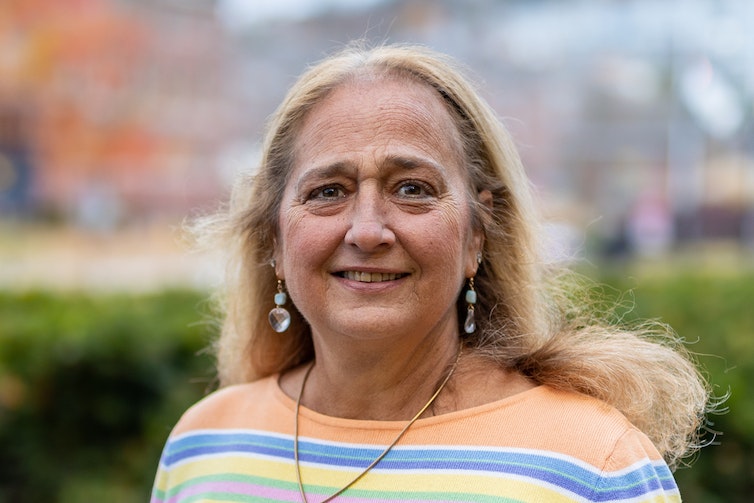 That’s the first question Erin Dunmire asks fellow patients diagnosed with glioblastoma, a rare and aggressive brain cancer that comes with a grim prognosis: 12-18 months to live and a five-year survival rate of less than 10 percent. Its tumors feature tiny tentacles that make it virtually impossible to remove every trace of the disease through surgery, making her inquiry an important one.

Dunmire has defied the odds, battling the disease twice and winning for more than 10 years. She believes God spared her so she can help others, and she is fulfilling that purpose with a $100,000 estate gift to benefit the WVU Cancer Institute.

Dunmire’s gift supports the Let the Journey Begin fund, which was established through a grassroots fundraising effort led by her family. To date, more than $300,000 has been raised through community events, charitable sales, and individual donations to benefit brain cancer research and comfort care for patients.

“Erin is an inspiration and testament to all who know her journey,” Hannah Hazard-Jenkins, M.D., WVU Cancer Institute director, said. “It’s truly amazing. She has dedicated so much of her time to philanthropy, as well as telling her story, to bring hope to so many.”

Dunmire’s cancer journey began when she was diagnosed with glioblastoma in 2011. In consultation with an interdisciplinary team of WVU Medicine physicians, she underwent surgery to remove a lemon-sized tumor from her brain and stayed cancer-free for nearly a decade – until a smaller brain tumor was discovered in fall 2020. Following surgery, chemotherapy, and radiation treatment, she is once again in remission.

Dunmire’s niece launched the fundraising effort following her initial diagnosis, and the initiative grew as word spread among family, friends, and the community. Dunmire noted that every dollar helps, particularly for an area of cancer study that often receives less attention. She hopes greater research will lead to treatment advances that offer a brighter future for the roughly 14,000 people diagnosed with glioblastoma each year.

“There’s hope,” Dunmire said. “But we’ve got to be able to fund what needs to be funded to be successful.”

With her estate gift, Dunmire hopes to ensure that the Let the Journey Begin fund continues to grow beyond her lifetime. Meanwhile, she is making the most of the time she has by connecting with recently diagnosed glioblastoma patients to provide emotional support.

“If I can give hope to the patient or even the family, I’m humbled to do that,” Dunmire said. “And I think God put me in this world to be able to do that. … I’ve just been blessed, and that’s due to the big man upstairs.”

Dunmire’s contribution was made through the WVU Foundation, the nonprofit organization that receives and administers private donations on behalf of the University.